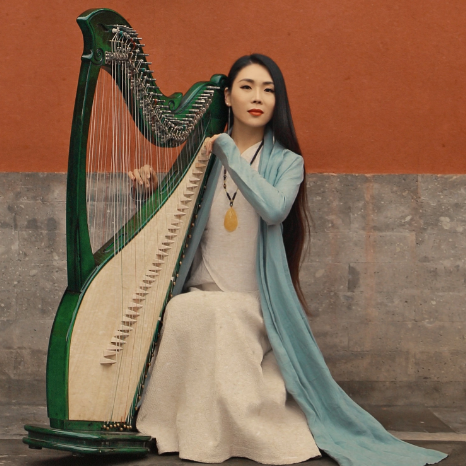 Lu Lu, born in 1987, a native of Henan, graduated from the China Conservatory of Music, and is the vice chairman of the Konghou Professional Committee of the Chinese National Orchestra Society.

In November 2009, the "Lulu Konghou Guzheng Joint Concert" was successfully held in the Concert Hall of the China Conservatory of Music

2014APEC, Lu Lu and Gu Konghou performed in the Summer Palace for the wives of Chinese and foreign heads of state

In December 2017, "Konghou Leading the Way · The World's First Lulu Konghou Situation Concert" was held in Guoyin Hall of China Conservatory of Music

In 2018, during the Beijing Summit of the Forum on China-Africa Cooperation, Lu Lu presented the imitation ancient Konghou "Hongluan" of the Tang Dynasty to the Federal Republic of Nigeria, and the Nigerian President's wife Aisha Muhammad Buhari held the handover ceremony.

In December 2018, Lu Lu and the Jiuding Konghou Orchestra, together with the musician Meng Wenhao and the Feng Orchestra, participated in the "Sailing 2019 - Chinese Music Festival"

In August 2018, Lu Lu performed in Taiwan "Dadun Caprice" concert, using the common historical and artistic language of both sides of the strait.

On October 1, 2019, board the 70th Daqing float to offer blessings to the motherland and accept the review

On February 2, 2022, the MV of the theme song of the same name sung with Li Guyi and others for the sitcom "Winter Olympic Family" was released

In September 2018, at the 3rd Silk Road (Dunhuang) Cultural Expo, presided over the Konghou section of the restored Dunhuang fresco musical instruments exhibition

In October 2018, he was invited to participate in the theatrical performance at the opening ceremony of the 5th World Buddhist Forum, and performed two legato performances of "Sanskrit World" and "Bodhi Tree".

In December 2018, he participated in the "Singing for the People" concert by "People's Artist" Guo Lanying, and performed the overture "My Motherland" together with top Chinese music performers Zhang Zunlian, Wang Zhongshan, Zhang Weiliang and Yang Jing in the Great Hall of the People

In February 2019, the established Jiuding Konghou Museum was selected as a "Silk Road Excellent" cultural institution by the Silk Road Cities Alliance

On June 22, 2019, at the reception for the 40th anniversary of the establishment of diplomatic relations between China and Ireland, performed the famous Chinese song "Spring River, Flowers and Moonlight Night"

In September 2019, the large-scale documentary "Dunhuang Musical Instruments" was broadcast on CCTV's ten sets of "Exploration and Discovery"

In October 2019, the special program "Musical Instruments in Dunhuang Murals" was broadcast on CCTV's "I Have Heirlooms" column

On September 3, 2019, on the Victory Day of the Anti-Japanese War, I brought 70 Konghou inheritors from Zhongmu, Henan, the ancient city of Konghou in China, who were trained for public welfare to play "My Motherland and Me", and participated in the recording of the Chinese Air Force's "70th Anniversary of the Founding of the New Chinese Air Force" and "Blue Sky". I am grateful to have you" theme promotional video

On October 14, 2019, he participated in the 10th Mao Dun Literature Award Ceremony held at the National Museum of China, directed the theatrical performance as one of the executive directors, and performed the musical literary work "Li Ping Kong Hou Yin"

In February 2020, with more than 20 modern and ancient Konghous on the stage of the 2020 China Federation of Literary and Art Circles "Hundred Flowers Welcome Spring" Spring Festival Gala

Luo Ai Konghou
Luo Aikonghou is an up master in the music area of station B. He currently has a total of 61,000 fans. His videos are mainly composed of Konghou renditions, spanning traditional Chinese famous songs, animation, and the second dimension.
read >>
Cui Junzhi
Cui Junzhi, the world's chief Konghou player, was originally a national first-class player of the Central Chinese Orchestra. Adjunct professor of China Conservatory of Music, Central Conservatory of Music and Artistic Director of China International Konghou Ensemble.
read >>
Lao Fan who plays Konghou next door
Heart-warming, happy~ Shenyang Conservatory of Music has a master's degree in Konghou performance. Lao Fan, who plays Konghou next door, is an up-master of Konghou playing at station B. Currently, he has a total of 54,000 fans. , and his representative works include "Left Finger Moon" and "Big Fish".
read >>
Wu Lin
Wu Lin, a native of Yingkou City, is a young performer of the Central Chinese Orchestra. Vice President of Konghou Association of Chinese Musicians Association.
read >>