From August 19th to September 29th, the National Art Fund 2022 Artistic Talents Training Funded the "Wulan Muqi One Specialized Multi-functional Performing and Creative Artistic Talent Training" project, and conducted intensive training in Hohhot, Inner Mongolia. During the 40-day training, 50 students from grassroots Wulan Muqi, literary and art groups and colleges and universities across the country listened to the theoretical lectures given by senior experts in musicology, composition and other fields, participated in the rehearsal of bands composed of various musical instruments, and participated in new works. The level of artistic theory and stage practice ability have been effectively improved.

"In November 2017, General Secretary Xi Jinping replied to the Ulan Muqi team members in Sunite Right Banner, Inner Mongolia, highly affirming the cause of Ulan Muqi, and hoped that Wulan Muqi would be guided by the spirit of the 19th National Congress of the Communist Party of China and vigorously promote the Ulan Muqi. The fine tradition of Lan Muqi takes root in the fertile soil of life, serves the herdsmen, promotes literary and artistic innovation, and strives to create more excellent works that are grounded, spread and retained, and will always be a 'red literary light cavalry' on the grassland." Gong Jian, a member of the party committee and vice president of Inner Mongolia Normal University, introduced that Wulan Muqi is a grass-roots professional art performance group in Inner Mongolia. The spirit of serving the people is well-known all over the country, and is affirmed by General Secretary Xi Jinping as a banner of the national literary and art front.

Gong Jian said that the art of Wulan Muqi in the new era should continue to innovate and develop while continuously absorbing the rich nutrition of the Chinese nation's traditions and showing the infinite charm of the Chinese nation's culture. It is hoped that the project team will further explore and carry forward the ability of Wulan Muqi's cultural heritage and innovation, and focus on solving the problem of the lack of high-level professional talents in grass-roots Wulan Muqi through creation, rehearsal, and combination training. 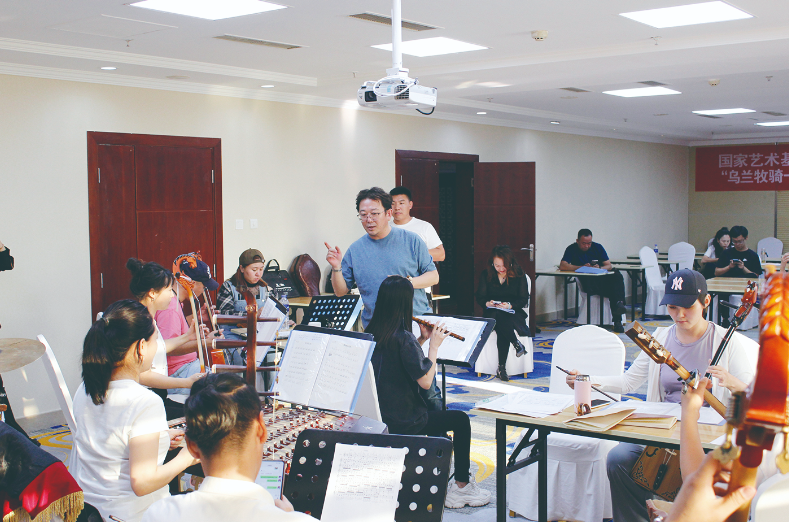 Close integration of theory and practice

After the key training in the intensive teaching stage, the students learned more about singing, musical instruments, composition, arrangement, etc., and wrote different styles such as "A Dad in a Dream" and "The Light of Mu love" at this stage. , works of different performance forms.

During the intensive rehearsal stage from September 5th to 20th, under the guidance of the instructor, the students focused on arranging and creating original works. Through the band rehearsal, while highlighting the students' "one specialization and multiple abilities", the team concept of "short and powerful" is always run through, and the students' team awareness and cooperation ability are cultivated.

The trainees are composed of 50 outstanding young artistic talents from Wulan Muqi Art Troupe, Art Theater, Vocational Art College, primary and secondary schools and other organizations in various regions of Inner Mongolia. All of them have more than 10 years of experience in Wulan Muqi and national Award-winning experience in provincial and ministerial-level competitions and exhibitions.

Yang Junhai, Dean of the School of Music of Inner Mongolia Normal University, said that this project aims to cultivate "one-specialized and multi-skilled" compound talents with at least one outstanding professional skill in writing or singing, and at least one other skill. It is hoped that on the basis of learning and inheriting traditional music culture, students will take this project as a new starting point for growth, take root in the fertile soil of ethnic music, go deep into the grassroots folk, discover, explore, collect and organize traditional music; in the future, they can independently carry out "creative transformation and innovative development" "Consciousness and ability to arrange, create, perform, and become an outstanding literary and artistic talent who "can get on the stage, get off the pastoral area, and enter the market".

"Li Ren Xing and Qingshan Ferry" together on the night of the group to spend the Mid-Autumn Festival
Organized by 肖毅 on 2022-09-19
On September 10, on the Mid-Autumn Festival night, the Central Chinese Orchestra's "Lirenxing and Qingshandu" Mid-Autumn Chamber Music Concert premiered in the Concert Hall of the National Centre for the Performing Arts.
read >>
Aksu is a good place, the beauty of intangible cultural heritage
Organized by 亦寒 on 2022-09-19
The heart is on the strings, the hands are on the drums, and the strings and drums are heard. When you hear music, you can dance, and there is no music to make a party. Musical instruments are the "water and air" in the life of Uyghurs.
read >>
Development of the national musical instrument industry in 2021
Organized by 沈梦溪 on 2022-09-16
In 2021, with the rapid development of China's economy, residents' consumption will shift from pursuing material consumption to spiritual and cultural consumption. Under this background, the total scale of China's music industry will reach 418.598 billion yuan.
read >>
Jinghu virtuoso Yan Shouping's special concert for the 70th anniversary of his career - "Swallow Falling Flower Branch"
Organized by 左树 on 2022-09-13
Mr. Yan Shouping, a famous Peking and Hu virtuoso, held a special concert for the 70th anniversary of his career at the Chang'an Grand Theater a few days ago. Many famous artists from Liyuan, including the famous Peking Opera performers Tan Xiaozeng and Zhao Baoxiu, took the stage to help out.
read >>
Suzhou Chinese Orchestra 2022-2023 Music Season Opening Concert "Towards the Light"
Organized by 茯苓 on 2022-09-09
On the evening of September 5th, the "4th China Suzhou Jiangnan Culture and Art International Tourism Festival" stage repertoire exhibition project and the opening concert of the Suzhou National Orchestra 2022-2023 Music Season "Towards the Light" was held in the Suzhou National Orchestra Concert Hall. open the curtain.
read >>