The long fantasy novel "Breaking the Sky" is the famous work of the Internet writer Tian Qian Tudou. Since 2009, this inspirational story of "30 years in Hedong, 30 years in Hexi, don't bully young poor" has inspired hundreds of millions of readers. The novel has been serialized for more than ten years, and has gone through the development of publishing, audio, animation, comics, TV series, games and other derivatives. Among them, the animation "Breaking the Sphere" has reached the championship of annual viewing volume, with a cumulative viewing volume of over 12 billion. .

On September 18, at the Grand Theatre of Prince Kung's Mansion, Yang Zhijian, a national first-class performer and representative inheritor of Shanghai's intangible cultural heritage "Guqin-making", performed a live performance of the famous Guangling songs "Long Xiang Cao" and "Fighting Fight". "Breaking the Sphere" anime theme song "Straight Breaking the Sphere" co-adapted "Dragon Soaring the Sphere". He integrated the scenes and imaginations of the ancients about soaring in the sky in "Dragon Soaring Exercise" into the youthful fighting spirit of "Breaking the Sky", hoping to spread the tradition to contemporary young people in an innovative form that integrates ancient music and modern cultural works. culture. Yang Zhijian performed "Dragon Soaring in the Sky" live. When ancient music meets modern music, a new spark is created. Yang Zhijian revealed that when he composed "Dragon Soaring in the Sky", he first learned about the work "Breaking the Sky" - it tells the story of a young man who is passionate, struggling, constantly A story of adversity. This reminded him of a very old guqin piece called "Long Xiang Cao", which describes the flight of a dragon. In the minds of Chinese people, the dragon is an important totem. It can be big or small, it can rise and can be hidden. When it rises, it soars in the universe, and when it is hidden, it lurks in the waves. meaning. "Long Xiang Cao" can be traced back to Zhuangzi's "Autumn Water", which is a very important piece of Taoism. After hundreds of years of inheritance, it has evolved from a tune expressing Taoism's cognition of heaven, earth and autumn waters to a tune describing a dragon.

Combined with the music of the anime "Breaking the Sphere", he made a brand-new fusion of the classic Guqin repertoire and modern anime music. "You can say it is a new creation, or you can say it is an adaptation." In his opinion, ancient music pays more attention to the expression of smooth lines. Modern music, especially popular songs, is often accompanied by a stronger rhythm and expresses the core idea in the form of thematic repetition. The two have different creative motives and different means to achieve them.

So, how exactly do you combine them? Yang Zhijian thought of a modern electronic MIDI synthesis method. In the first half, electronic music is used to present a wider and looser white space, allowing more space for the guqin instrument, and the feelings of Longxiang and Jiutian can be expressed, more sparse, and more linear. In the second half, more drum beats and more strong rhythm beats are added. On the one hand, it can gradually get better and push the mood up. On the other hand, it is more suitable for the theme of modern pop music, and the two can be integrated. 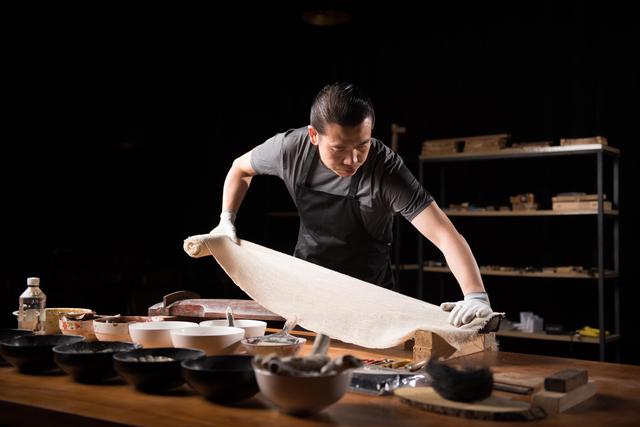 Through high-quality online literature, Yang Zhijian called on people to pay attention to the intangible cultural heritage. On the day of the performance on September 18, Yang Zhijian used a replica of the ancient famous qin "Jiuxiao Huanpei". "Jiuxiao Huan Pei" has been an important tool in the qin altar since the end of the Qing Dynasty, and it has been respected by scholars and guqin players for hundreds of years, and is regarded as "Dingding Tangwu" and "immortal product". It has an ancient shape and perfect pronunciation. After the founding of the People's Republic of China, it entered the Palace Museum and is a nationally renowned artistic treasure.

China's intangible cultural heritage qin works awards debut at the Netherlands Expo
Organized by 年糕 on 2022-09-23
2022 marks the 50th anniversary of the establishment of diplomatic relations between China and the Netherlands. A few days ago, the reporter learned that the "Chinese Intangible Cultural Heritage of the Qin Qin Works Award" will be unveiled at the China Bamboo Garden of the 2022 Holland Expo from September 15 to September 25. Politicians and tourists from all over the world come to watch. Among them, 7 qin masters are from Yangzhou.
read >>
Huang Deyuan, inheritor of the intangible cultural heritage "Zhejiang Guqin" and "Wenzhou Dialect"
Organized by 左树 on 2022-09-21
Calligraphy and peony painting are performed in the morning, and Guqin is played and recited in the afternoon. This is what he does every day in a hurry. Some people say that his "life calendar" has not changed for decades, which is too boring; some people don't understand why he still insists on spending hours every day playing the guqin, painting, and reciting, and nothing falls behind.
read >>
Celebrating the National Day Guqin Cultural Exchange Meeting was held at the Flower Garden of Mayu City in the Flower Expo Garden
Organized by 赵锦辛 on 2022-09-20
On the evening of September 17, 2022, the "Welcome to the National Day Guqin Cultural Exchange Conference", hosted by the Fujian Cultural Volunteer Association Haisi Qindao School, co-organized by Qinghuan Guqin Museum, Mayucheng Huayuan, and Cixin Group, was held at the Flower Expo. Garden Mayu City Flower Fringe was held.
read >>
Famous Guqin songs will be played in turn and the 2022 Guqin "Autumn Moon Collection" will be successfully held
Organized by 拙 on 2022-09-20
Autumn is getting darker, the 2022 Guqin "Qiuyue Gathering" [1] and "Autumn Moon Gathering" [2] were successfully held on September 17 and September 18 at the Ancient Capital Cultural Hotel in Xi'an.
read >>
The relationship between Guqin and Taoist culture
Organized by 辞惘 on 2022-09-17
Recently, Hunan Shaoyang and Guangdong Lingnan Guqin cultural exchange activities were held in Shaoyang. In the Yuqing Qin House of Yuqing Palace in Shaoyang, Chen Shiqiang, the non-hereditary inheritor of Lingnan Guqin art in Guangzhou, gave a special lecture on the title of "History of Guqin - Origin", and played the famous Guqin song "Mountain Residence".
read >>