Calligraphy and peony painting are performed in the morning, and Guqin is played and recited in the afternoon. This is what he does every day in a hurry. Some people say that his "life calendar" has not changed for decades, which is too boring; some people don't understand why he still insists on spending hours every day playing the guqin, painting, and reciting, and nothing falls behind.

"I'm not tired at all. I enjoy a poetic life every day. Playing the qin and reciting these traditional intangible cultural heritages are the best way to keep healthy." The 78-year-old calligrapher and painter, inheritor of the Zhejiang-style guqin of the intangible cultural heritage in Wenzhou, Wenzhou Chanting Huang Deyuan, the inheritor of non-genetic inheritance, took out his new book "Dazhentang Qin Painting and Calligraphy" in the art gallery, and chatted with reporters how he walked on the road of qin, calligraphy and painting. 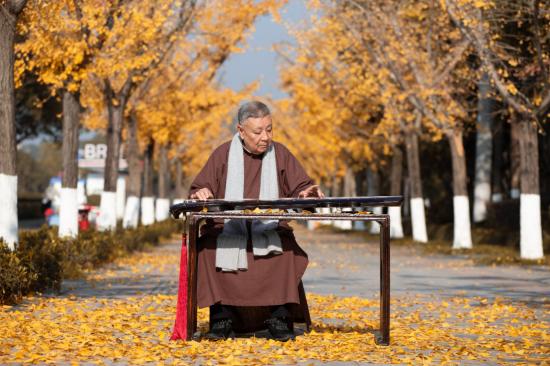 Do you know a guqin
Embark on the path of learning

Seven strings are good friends, and two ears are bosom friends. Huang Deyuan fell in love with erhu, sanxian, pipa and other musical instruments when he was seven or eight years old, and fell in love with Guqin when he was 11 years old. He was playing erhu at a relative's house, and when he met an elder who was in the guqin business, he asked him softly: Do you know guqin? Do you know the timbre of guqin "subtle, subtle, round and smooth"? Knowing or not, Huang Deyuan became interested in Guqin. In July 1955, with the support and help of his grandfather, he brought the "six kinds" gifts from Wenzhou to Hangzhou, where he learned the guqin from Xu Yuanbai, a master of guqin art from Zhejiang school. After Mr. Xu Yuanbai's death, he continued to learn Guqin with Xu Yuanbai's wife.

The sound of the guqin hides the story. After mastering the playing skills of guqin, Huang Deyuan never put down the guqin again. He traveled to Shanghai, Nanjing, Beijing and other places successively to communicate with pianists from all over the country and constantly improve his qin skills.

When teaching Guqin, he found that there were no etudes in traditional Guqin teaching, so he figured out a method of "rehearsing with songs", and used classic and short pieces such as "Guan Shanyue" and "Junk Crazy" as students to practice fingering. 's tracks. He also wrote the article "Man Talking Guqin", focusing on "Man Talking", explaining in simple terms what is the way of the qin, how the skills of playing the guqin and the artistic conception of the tune are integrated, so that guqin lovers can deeply appreciate the kind of music that the guqin brings to people. Emotion, a state.

With more and more students, in 2008, he led the establishment of the Wenzhou Guqin Association. At that time, only a dozen people in Wenzhou could actually play the guqin, but now there are thousands of guqin lovers in Wenzhou. 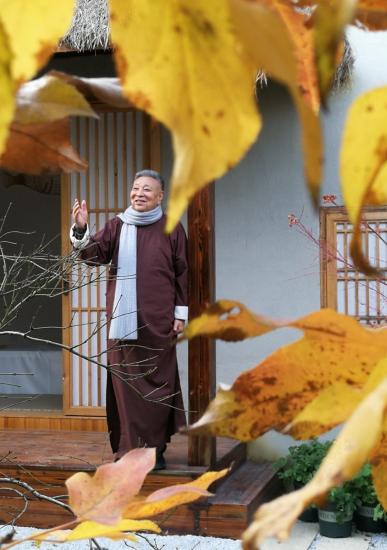 One "change" and the other "familiar"
Fully display the talent of calligraphy, painting and chanting

Huang Deyuan's talent in painting and reciting was unintentionally discovered.

Mr. Xu Jinhou talked to Huang Deyuan's father and asked Huang Deyuan to abandon medicine and pursue painting and calligraphy. Since 1980, Huang Deyuan has specialized in peony painting. While inheriting the characteristics of Yongjia School of Painting, he made breakthroughs in the techniques of creating peony, including ink wash, color ink, light ink, heavy color, etc., highlighting the grace and elegance of peony.

In addition, with regard to the recitation of Wenzhou dialect, Huang Deyuan mentioned the four words "dark eyes and ears". His mother and uncle both studied at the Mengguan private school. In particular, his little uncle was the best reciter in the school at that time, and naturally he buried the seed of Wenzhou dialect recitation in his heart. Slowly, the seed took root.

In 2012, the team of Xu Jianshun, a professor of Minzu University of China and secretary-general of the Chinese Recitation Society, conducted interviews and recordings of Chinese recitations across the country, and organized them. When they listened to the Wenzhou dialect recitation recorded by Huang Deyuan, they were very surprised and recorded it three times. In 2014, Huang Deyuan was named the intangible inheritor of Wenzhou chanting.

The piano has a voice, and love has an echo. When guqin, calligraphy and painting, and Wenzhou dialect recitation made Huang Deyuan feel happy, he also passed on this happiness to more people. He has set up public welfare classes in Wenzhou Workers' Cultural Palace and Yongjia Qin Studies Association, either teaching Guqin, or teaching calligraphy, painting and recitation.

"Building the art museum in the community is a beautiful bloom of the 'flower of intangible cultural heritage' in the community. It attracts more people to experience the unique charm of intangible cultural heritage at their doorstep, and feel how the guqin, Wenzhou dialect recitation, and painting and calligraphy fly in.' Ordinary people's home'." Citizen Ms. Chen, while visiting the art museum, took pictures and sent them to the circle of friends, so that friends remember to check in.

At the end of the interview, one of Huang Deyuan’s students told the reporter: Today, the most favorite thing for Mr. Huang Deyuan is to call and recite in the art gallery with friends and students; ...The love of his life is in the guqin, calligraphy and painting, Wenzhou dialect recitation, and intangible cultural heritage...

China's intangible cultural heritage qin works awards debut at the Netherlands Expo
Organized by 年糕 on 2022-09-23
2022 marks the 50th anniversary of the establishment of diplomatic relations between China and the Netherlands. A few days ago, the reporter learned that the "Chinese Intangible Cultural Heritage of the Qin Qin Works Award" will be unveiled at the China Bamboo Garden of the 2022 Holland Expo from September 15 to September 25. Politicians and tourists from all over the world come to watch. Among them, 7 qin masters are from Yangzhou.
read >>
Famous Guqin Songs Integrate "Fighting the Sky" to spread traditional culture to young people
Organized by 日记里的汤姆 on 2022-09-22
On September 18, at the Grand Theatre of Prince Kung's Mansion, Yang Zhijian, a national first-class performer and representative inheritor of Shanghai's intangible cultural heritage "Guqin-making", performed a live performance of the famous Guangling songs "Long Xiang Cao" and "Fighting Fight". "Breaking the Sphere" anime theme song "Straight Breaking the Sphere" co-adapted "Dragon Soaring the Sphere".
read >>
Celebrating the National Day Guqin Cultural Exchange Meeting was held at the Flower Garden of Mayu City in the Flower Expo Garden
Organized by 赵锦辛 on 2022-09-20
On the evening of September 17, 2022, the "Welcome to the National Day Guqin Cultural Exchange Conference", hosted by the Fujian Cultural Volunteer Association Haisi Qindao School, co-organized by Qinghuan Guqin Museum, Mayucheng Huayuan, and Cixin Group, was held at the Flower Expo. Garden Mayu City Flower Fringe was held.
read >>
Famous Guqin songs will be played in turn and the 2022 Guqin "Autumn Moon Collection" will be successfully held
Organized by 拙 on 2022-09-20
Autumn is getting darker, the 2022 Guqin "Qiuyue Gathering" [1] and "Autumn Moon Gathering" [2] were successfully held on September 17 and September 18 at the Ancient Capital Cultural Hotel in Xi'an.
read >>
The relationship between Guqin and Taoist culture
Organized by 辞惘 on 2022-09-17
Recently, Hunan Shaoyang and Guangdong Lingnan Guqin cultural exchange activities were held in Shaoyang. In the Yuqing Qin House of Yuqing Palace in Shaoyang, Chen Shiqiang, the non-hereditary inheritor of Lingnan Guqin art in Guangzhou, gave a special lecture on the title of "History of Guqin - Origin", and played the famous Guqin song "Mountain Residence".
read >>