In recent years, under the environment where the country vigorously advocates the promotion and inheritance of the excellent traditional Chinese culture, Chinese music has gradually returned to the public eye and is loved by people. Many families choose to let their children learn traditional musical instruments and let the Chinese music culture be passed on to teenagers. 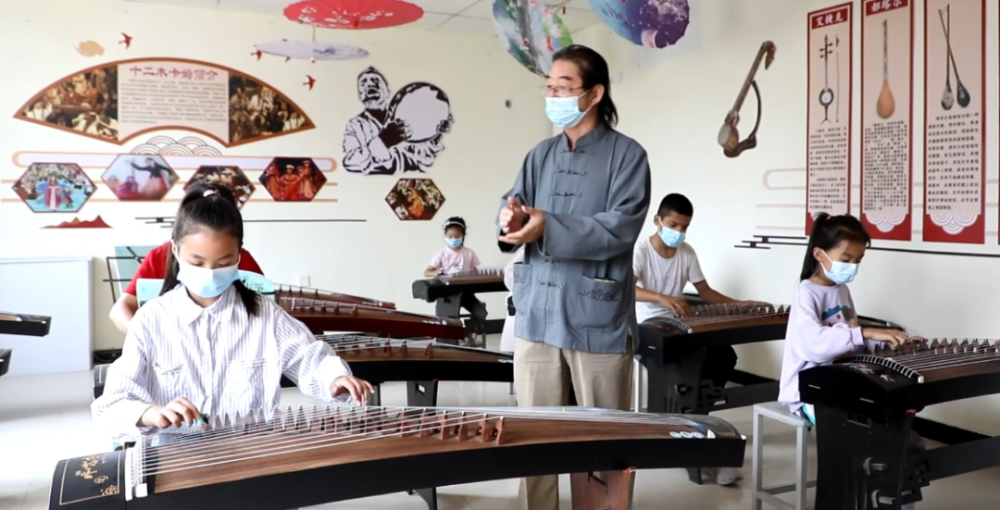 On September 18, the reporter came to the guzheng classroom in Binhu Community, Xinhe County, and saw that under the guidance of the teacher, the students were fiddling with seven strings, the smooth tunes played softly, and the melodious sound of the zither played in the classroom. It echoes in, making people memorable. Student Tang Xuanran said: "I have been learning Guzheng for a year, and I feel very proud to be able to inherit and carry forward Chinese traditional culture."

Student Cui Zichen said: "Guzheng has brought a lot of fun to my life and enriched my study life. I will continue to study hard in the future."

By learning the guzheng, while the children are enjoying it, parents also find new changes in their children.

Gao Huiqing, the parent of the student, said: "Since learning the guzheng, I have found that the child's personality has become more and more cheerful, which is also of great help to learning. For example, the child's intelligence and thinking have expanded than before."

Guzheng teacher Zhang Fusheng said: "It is our mission to inherit and carry forward the excellent traditional Chinese culture. For children who are interested in learning Guzheng, we must actively give technical guidance and spiritual encouragement, so as to guide them to carry forward the excellent traditional Chinese culture. The essence and connotation continue to be carried forward, and the consciousness of the community of the Chinese nation is further forged."

Yangjiang held a guzheng concert to celebrate the Mid-Autumn Festival
Organized by 汤圆 on 2022-09-14
On the evening of September 10th, Yangjiang City held the 2022 Mid-Autumn Festival Guzheng Concert of "Welcome to the 20th National Congress of the Communist Party of China". Many Guzheng lovers played ancient and modern classics, showing the "beauty of clothes" of Hanfu and inheriting the Chinese nation. Excellent traditional culture brings a wonderful audio-visual feast to the masses.
read >>
The rhythm of the zheng is passed on, and the Beijing Musical Instrument Society Youth Chamber Orchestra holds a guzheng concert
Organized by 湛鹰 on 2022-09-06
Recently, a unique themed guzheng concert was staged in the concert hall of the Central Chinese Orchestra.
read >>
Jade Dazzling Zheng Troupe's Guzheng Concert Held in Jiande City
Organized by CT. on 2022-09-01
Let the ancient and the modern, the common prosperity. Recently, a special guzheng concert by the Jade Dazzling Zheng Troupe was held in Jiande City, attracting a large number of zheng music lovers.
read >>
Chizhou implements the action of "learning from old age" to warm people's hearts
Organized by 袁城 on 2022-08-31
In Dongliu Town Senior Citizen University, the reporter learned that in order to improve the fun and entertainment of senior education and meet the needs of the elderly to enrich their spiritual life to the greatest extent, the school opened Tai Chi, Tai Chi, Dance, Huangmei Opera, health care and other courses.
read >>
The new book sharing session of "Introduction to Guzheng for Children" was successfully held
Organized by vespa on 2022-08-29
The new book sharing session of "Introduction to Guzheng for Children" was successfully held at the Binhu International Convention and Exhibition Center in Hefei City on the afternoon of August 27th.
read >>