In midsummer July, the summer trees are green. Peng Liyuan warmly welcomed Iriana to accompany President Joko Widodo to visit China at the Diaoyutai State Guesthouse. The wives of the two heads of state happily recalled the beautiful scenes of the many meetings between the two sides.

Peng Liyuan said that China and Indonesia are important neighbors to each other, and the friendship between the two peoples has a long history. In recent years, the relationship between the two countries has become increasingly close, and people-to-people exchanges have been very lively. Indonesia is the second largest tourist destination country favored by Chinese tourists. It is expected that the exchanges between the two sides in relevant fields will continue to deepen. Iriana said that she was very happy to see old friends again in Beijing, and thanked President Xi Jinping and Professor Peng Liyuan for their warm reception. We welcome more Chinese tourists to visit Indonesia, and wish Indonesia and China long-term friendship. 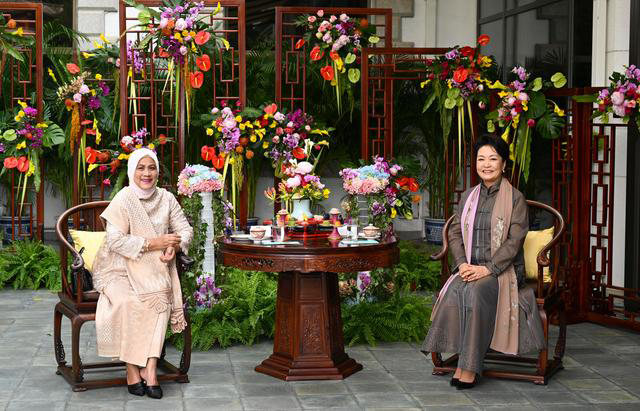 On July 26, Peng Liyuan, wife of President Xi Jinping, met with Indonesian President Iriana Jokov in Beijing. This is a wonderful folk music performance by the teachers and students of the China Conservatory of Music that the two heads of state and their wives enjoy together.

The wives of the two heads of state jointly enjoyed the wonderful folk music performances brought by the teachers and students of the China Conservatory of Music. The guzheng performance "The Fishing Boat Sings Evening" has a beautiful and melodious tone; the traditional Chinese national instrument "Ruan" and the Indonesian classic folk song "Boat Song" adapted by a female soloist have a melodious and pleasant melody. Peng Liyuan introduced to Iriana the long history of traditional Chinese national musical instruments and the artistic characteristics of playing techniques. Iriana praised the beauty of Chinese instrumental music performance, and said that I was very moved to hear young Chinese artists perform Indonesian songs in Beijing, and the true feelings of Chinese friends entered my heart. Peng Liyuan said that music has no borders and can communicate hearts and friendships. China and Indonesia share similar cultures, arts and concepts, and it is hoped that cultural exchanges and mutual learning will play a greater role in enhancing the friendship between the two sides.

The new folk music performance of "Shanlan Music Square" is a stunning first show, bringing new Chinese culture to life
Organized by 钟离 on 2023-02-07
The creative program of the Spring Festival Gala, "Man Ting Fang · National Color", stunned the whole country, chanted the traditional color with music and painted it with dance, so that the audience could deeply appreciate the unique romantic mood and oriental aesthetics of Chinese culture, and also let the "Chinese traditional color" cause extensive discussion in recent days.
read >>
Impression of Chinese music Hefei National orchestral Spring Concert invites you to listen to the rhyme of folk music
Organized by 风月呢喃 on 2023-02-06
At 19:40 on February 4, 2023, sponsored by Hefei Culture and Tourism Bureau, organized by Hefei Cultural Center and Baohe District Culture and Tourism Bureau, co-organized by Baohe District Cultural Center and Baohe District Musicians Association, Hefei Chinese Orchestra performed "Impression of Chinese Music" 2023 Hefei Folk Orchestral Spring Festival Concert was played in the concert Hall of Hefei Grand Theater.
read >>
A series of cultural activities of "Spring Festival and Lantern Festival" for the Spring Festival in Qixian County in 2023
Organized by 没头脑 on 2023-02-03
During the Spring Festival and Lantern Festival in 2023, in order to further guide the cultural and literary workers in the county to face the grassroots and serve the masses, and create a happy and peaceful festival atmosphere.
read >>
Shigatse City: "Our Festival · 2023 Spring Festival Tibetan New Year" Gala
Organized by 岚玖 on 2023-01-29
A few days ago, Nanmulin County, Shigatse City, held the "Our Festival · Tibetan New Year 2023 Spring Festival" gala with the theme of "Praising the New Era of the Twentieth National Congress of the Communist Party of China", which deeply promoted the spirit of the Twentieth National Congress of the Communist Party of China into the mind with distinctive themes, wonderful works and rich carriers.
read >>
Good musical instruments and Lankao make perfect folk music industry chain
Organized by F.JCLOVE on 2023-01-29
"Good musical instruments, made by Lankao", entered Lankao Music Town, Nanyang Town, Lankao County, Henan Province. The six bold characters on the street glittered in the sun. In that year, Secretary Jiao Yulu led the Lankao people to plant paulownia for windbreak and sand fixation, which is one of the best materials for the soundboard of national musical instruments.
read >>