Singing out all kinds of feelings, the suona culture will be inherited from generation to generation

There is a kind of "domineering" instrument in the national instruments. Compared with the loud and small strings of the pipa, the suona is loud and exciting, and everyone can't help but know it when it is played. The suona has never been a white snow in spring. Some people say that the suona has played all one's life from birth to burial, from marriage to birth.

There is a family named Wang in Guoyang. Since the Guangxu period of the Qing Dynasty, they have lived by playing suona for generations, known as "Wang's suona". In 2021, the Wangjia Suona was included in the eighth batch of municipal intangible cultural heritage list of Bozhou City. A Hundred Years of Wang's Suona

Wang Libin, who is in his early 50s this year, is the fourth generation inheritor of Bozhou municipal intangible cultural heritage Wang Suona. According to his introduction, Wang's suona is mainly distributed in Guoyang, Yongcheng, Henan, Dangshan, Anhui and other places, especially in Guoyang County. The heyday of the Wangjia Suona was around the founding of New China. At that time, the two sides of the Wohe River and the border between Henan and Anhui left footprints of the Wangjia Suona artists.

Suona, Guoyang is called flute, also known as trumpet. As early as 1889, Wang Huaping, the founder of the first generation of Wangjia Suona, went to Yongcheng, Henan Province, and Dangshan, Anhui Province, to learn art when he was young. Later, he returned to his hometown to establish the "Wangjia trumpet class" to support his family by helping farmers do weddings and funerals.

Wang Qinghai, the second generation descendant, excels in skills and is respected by the local people.

Wang Zhengxian, the third generation descendant (stage name: Xiaojiao), is also a disciple of a noble family. He is famous on both sides of the Vortex River with his unique skills. When he was young, he played skillfully and excellently. In the folk "relying on the box" (commonly known as the top ring) for many times, his skill was superior to others, and he was known as "Wang Sticky". "Sticky" is compared to a high level and high skill in northern Anhui, which is intended to praise the perfection of suona playing skills. "Xiaojiao" is the nickname given to him by the local people, and it is also the origin of Wang Zhengxian's stage name. At that time, "Xiaojiao" became popular in Huaibei and Yongcheng, and people who loved suona came to learn from the Wangs.

Wang Libin is the representative of the fourth generation of descendants. His performance skills have been continuously developed and innovated on the basis of family tradition, which has further improved Wang's suona art.

Wang Xiangyang, the fifth generation descendant, is a post-90s generation and now works in the Beijing National Orchestra. At the age of 5, he studied suona with his grandfather and father. In 2010, he was admitted to the Central Conservatory of Music and studied under Professor Shi Haibin, a famous suona player. Wang Xiangyang once served as the chief of the suona part of the Chinese Youth National Orchestra, and participated in the third and fourth Chinese Orchestra Week series concerts. In recent years, he has won many awards in domestic and international music competitions. 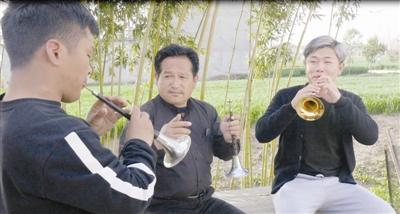 Succession of Suona Culture from Generation to Generation

"Suona is a kind of wind and percussion music that is suitable for all kinds of civil activities, such as weddings and funerals, festivals and ancestor worship," said Wang Libin. Throughout the ages, the suona has formed a conventional relationship with the common people, and is integrated with weddings and funerals, which has been deeply engraved in people's minds. You don't have to go near to know whether the host is doing red or white things, and you can also hear the ritual process of doing things, which is why other musical instruments cannot replace the suona.

"Our family has been playing for several generations and has worn out more than 100 suona pieces. These suona pieces are all meritorious people who accompany me when I grow up. Looking at these old suona pieces, I am very excited." Wang Libin said that he kept several boxes of his old suona pieces as souvenirs. In the cabinet of Wang Libin's home, there are also thick music scores, which have been handed down from generation to generation.

Wang Libin has been focusing on the study of suona playing since he was young. Although his suona playing skills are very excellent, he still strives to improve his suona skills. "Suona playing is my major, and if I don't play it for a while every day, I will feel my shortcomings." Wang Libin said that he would take time to practice playing Suona in the vast fields every day. When going out to perform or rehearse the Suona, Wang Libin would look at himself in the mirror. He could not tolerate his uncoordinated and unprofessional image for the audience. 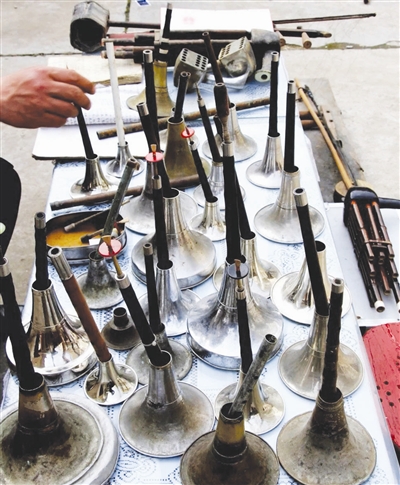 Wang Libin has always treasured the suona used before

At the same time, playing the suona with his nose is also one of Wang Libin's unique skills. As long as there is a performance, he will perform this skill.

Wang Libin said: "The suona has a unique temperament and warm feelings. One blow must be a lifelong love, so that the suona can be integrated into his own blood."

A single pipe brings out all kinds of feelings

Over the past hundred years, Wang's Suona has excavated and sorted out many ancient tunes in its continuous development, such as Fan Zidiao, Wu Zikai, Da Taohong, Da Bangchui, Six Gentlemen, Meng Jiangnv, etc. At the same time, Wang's Suona has also created many new works, such as "Peony Flowers Outside the City", "Cangmang", "Celebrate Victory", "Celebrate the Harvest", "Ten Thousand Year Red", "Joyful Ocean" and so on.

Wang's suona is closely related to the life customs of the people in northern Anhui, showing strong regional cultural characteristics. Because Suona originates from folk minor and folk tunes, it also has certain reference value for modern folk songs.

At present, Wang Libin and his Wangjia Suona Art Troupe have created and played a number of excellent songs popular with the masses in the principle of closer to life, closer to the masses and closer to reality, full of strong local flavor of northern Anhui. On the basis of playing the suona, it also performs operas, sketches, crosstalk, magic, singing and dancing and other plays, which makes the mobile stage colorful and climax one after another, and sets off a warm atmosphere. When performing in various places, it is unanimously praised. 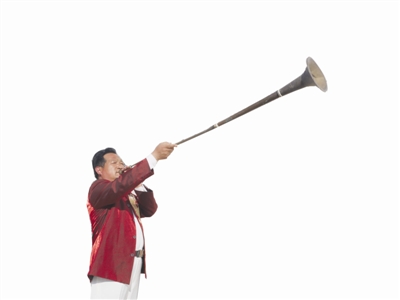 The sound of suona can not only produce bleak songs, but also warm poems. Wangjia Suona, an ancient art, has developed new cultural connotation and become a beautiful name card of intangible cultural heritage in our city through generations of inheritance and innovation.