On January 12, at the release ceremony of the "Hunan Good People List" in the second half of 2022 and the on-site exchange activity of "China Good People" and "Hunan Good People" held in Liling, Zhuzhou, Li Shuyou, the old man who created the folk music version of "Spring of Cattle Herding Class", was popular with the public.

Li Shuyou, 78 years old, is a performer who can play more than ten kinds of national instruments. He gave up the comfortable life in the city and returned to his hometown. It took seven years to teach ethnic musical instruments for left-behind children free of charge, and let rural children feel the beauty of music.

Since the winter holiday, an old street in Jiantouzhou Village, Dongfu Town, Liling, Zhuzhou, has heard melodious music every day. The sound comes from a private house called "Shuyou Lefang". A group of children played classic music such as "Liuyang River" and "Red Star Takes Me to Fight". The old man who directed them to play with different instruments was Li Shuyou.

The 77-year-old Li Shuyou loved ethnic musical instruments such as erhu and bamboo flute since childhood. In the sixties and seventies of the last century, he worked in the army literary and artistic troupe, and was sent to the Sichuan Conservatory of Music for further study on such instruments as the three-stringed instrument and the Liuqin instrument. Before retirement, he also served as the head of Liling Huagu Opera Troupe. It can be said that Li Shuyou has dealt with folk music all his life. At the end of 2014, Li Shuyou retired and returned to his hometown. I found that many left-behind children in the village were addicted to online games because of neglect of discipline, so I wanted to guide them to find the right hobbies. So he bought folk musical instruments from his own pocket, transformed his old house into a "music classroom", and taught ethnic musical instruments for left-behind children free of charge. "Take these children well, and their parents can work at ease."

In the face of a few people's doubts about his free teaching, Li Shuyou did not retreat. In the summer vacation of 2015, his "Music Classroom" began to recruit students for teaching.

In 2007, he brought more than 200 "apprentices", and some of them were admitted to the Conservatory of Music

The foundation of music is weak. In order to improve the children's interest in learning, Li Shuyou has been tireless in on-site guidance while racking his brains to find teaching methods.

In terms of music selection, Li Shuyou will choose some familiar children's songs and some popular music scores to let children learn, which will greatly improve their interest in learning. Under the patient guidance of his hands, the children who initially read do, re, mi, fa and sol in the notation as 12345 gradually learned to play a complete piece of music. "None of the children who come to study here give up halfway," Li Shuyou said with a smile. 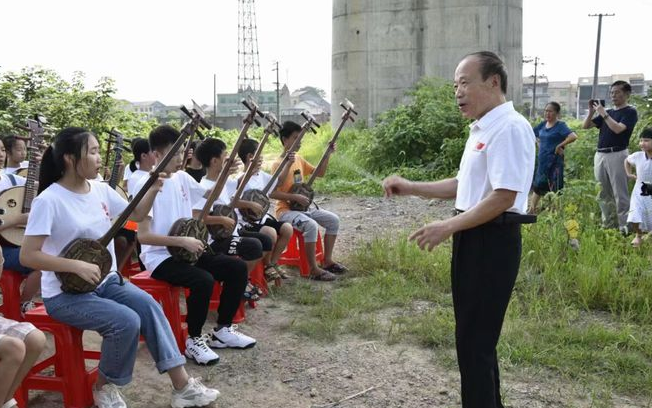 Most young and middle-aged people in Jiantouzhou Village go out to work, and there are nearly 500 left-behind children raised by grandparents. The entertainment facilities in rural areas are limited. Parents are worried about children playing with mobile phones and paddling in the wild during the winter and summer holidays. Now there are music classes in the village, and children are willing to spend their holidays here. Deng Jilin, a villager, put his grandson and granddaughter at Li Shuyou's home to study folk music. "This is the most reassuring place."

In just a few years, children's instrumental music level has been significantly improved. In 2019, Li Shuyou gathered more than 30 rural children without folk music foundation to form a children's national orchestra capable of playing more than ten kinds of national instruments. Today, the orchestra has grown to more than 90 people and has a small local reputation.

In the past seven years, Li Shuyou has brought more than 200 "apprentices", some of whom learned to read music and play various musical instruments under his training; Some of them entered the conservatory of music and engaged in music-related careers after graduation; There are more children who have won awards in talent competitions.

When the retired elderly met the left-behind children of the "bow tribe", netizens praised and said that this was the spring of the Chinese version of "cattle herding class".

"I will stick to it until I can't teach." Li Shuyou said that music changes life and education achieves dreams. He called on more musicians to join the children's national orchestra to build a rural cultural and artistic front and serve rural children.

The new folk music performance of "Shanlan Music Square" is a stunning first show, bringing new Chinese culture to life
Organized by 钟离 on 2023-02-07
The creative program of the Spring Festival Gala, "Man Ting Fang · National Color", stunned the whole country, chanted the traditional color with music and painted it with dance, so that the audience could deeply appreciate the unique romantic mood and oriental aesthetics of Chinese culture, and also let the "Chinese traditional color" cause extensive discussion in recent days.
read >>
Impression of Chinese music Hefei National orchestral Spring Concert invites you to listen to the rhyme of folk music
Organized by 风月呢喃 on 2023-02-06
At 19:40 on February 4, 2023, sponsored by Hefei Culture and Tourism Bureau, organized by Hefei Cultural Center and Baohe District Culture and Tourism Bureau, co-organized by Baohe District Cultural Center and Baohe District Musicians Association, Hefei Chinese Orchestra performed "Impression of Chinese Music" 2023 Hefei Folk Orchestral Spring Festival Concert was played in the concert Hall of Hefei Grand Theater.
read >>
A series of cultural activities of "Spring Festival and Lantern Festival" for the Spring Festival in Qixian County in 2023
Organized by 没头脑 on 2023-02-03
During the Spring Festival and Lantern Festival in 2023, in order to further guide the cultural and literary workers in the county to face the grassroots and serve the masses, and create a happy and peaceful festival atmosphere.
read >>
Shigatse City: "Our Festival · 2023 Spring Festival Tibetan New Year" Gala
Organized by 岚玖 on 2023-01-29
A few days ago, Nanmulin County, Shigatse City, held the "Our Festival · Tibetan New Year 2023 Spring Festival" gala with the theme of "Praising the New Era of the Twentieth National Congress of the Communist Party of China", which deeply promoted the spirit of the Twentieth National Congress of the Communist Party of China into the mind with distinctive themes, wonderful works and rich carriers.
read >>
Good musical instruments and Lankao make perfect folk music industry chain
Organized by F.JCLOVE on 2023-01-29
"Good musical instruments, made by Lankao", entered Lankao Music Town, Nanyang Town, Lankao County, Henan Province. The six bold characters on the street glittered in the sun. In that year, Secretary Jiao Yulu led the Lankao people to plant paulownia for windbreak and sand fixation, which is one of the best materials for the soundboard of national musical instruments.
read >>