The historical origin of cucurbit silk

268 views · Organized by 不知桃夏 on 2022-02-23
Hulusi has a long history and was gradually evolved and transformed from the "sheng" in the Central Plains. Originated in the Central Plains, and later spread to the southwestern minority areas. The structure still maintains the legacy of ancient musical instruments. Its two auxiliary pipes do not open sound holes, like the ancient Xiao, and can be used to produce continuous fifths. However, its director has opened 7 sound holes, which is very similar to the later Xiao and Di, showing its radicality in history. However, today's gourd flute still maintains the characteristics of ancient similar instruments in structure.
The shape and structure of the cucurbit silk is unique, it is made of a complete gourd, plus three bamboo tubes and three metal reeds. At the handle end of the gourd, a bamboo pipe is inserted as a mouthpiece, and the gourd is used as a resonance box; three bamboo pipes with different thicknesses are inserted into the bottom of the gourd, each bamboo pipe is inlaid with a copper or silver reed, and the middle The main pipe is the thickest, with seven sound holes on it, which can blow out the melody, and the auxiliary pipes on both sides can only produce harmonics that resonate with the main pipe. 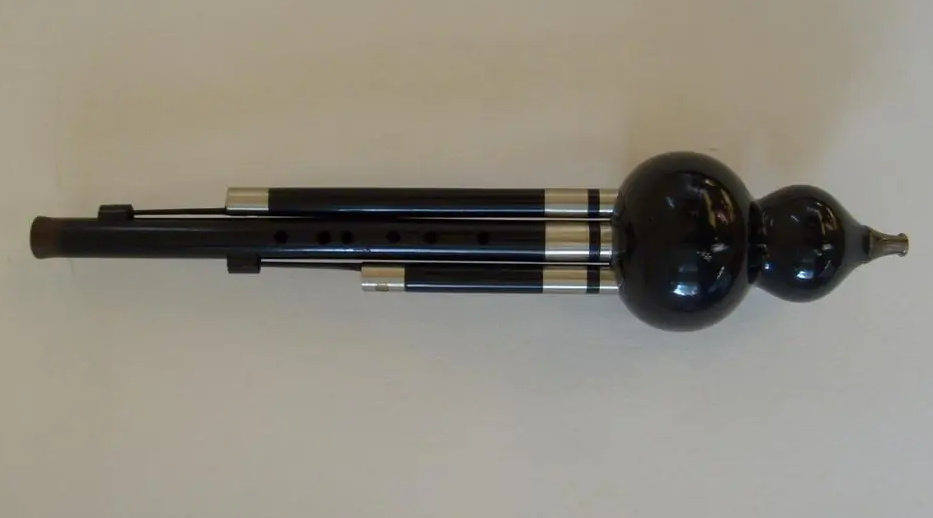 Like other flute instruments, the calabash flute has a relatively low volume, but the sound of its chief executive is soft and delicate, and under the background of the continuous sound of the two auxiliary pipes, it gives a subtle and hazy beauty. Because the vibrato it blows is as elegant and soft as shaking silk, some people also call it "Hulusi".
Gourd flute, gourd flute and flute every year during the slack season or during various festivals and gatherings, as well as during the usual labor, are a good time for Achang youth to talk about love and find lifelong partners. Whenever this time, no matter where the young men go, they will stick the March Xiao at the back of the neck in the collar, or pin it at the waist. No matter in the village, next to the village, or on the way to the street, as long as you meet a girl you love, you will play the music that you can listen to, and ask the girl to stop for a while, and then come up to chat and ask the girl's famous name. If the girl is still out of love at this time, and consciously knows each other, she will respond skillfully. The young man understood and offered to send the girl home, but the girl replied, "If you want to send it, you have to send it to Zhaizitou, and you can't send it halfway." So the young man happily played the flute, sang folk songs, and accompanied the girl home, pure and innocent. love begins here.
Whenever the sun goes down, the young men, after dinner, are busy washing and decorating, they quietly come to the house of their beloved girl, play the gourd flute, and use beautiful tunes to entice their sweethearts to come out to meet. The girl was flustered when she heard this kind and familiar tune, and hurried back to her room to dress up. Then go out for an excuse to have a tryst with a lover. If it is the first visit, the girl's sister-in-law or mother will open the door warmly and invite the young man to sit down by the fire in the house, and the family will avoid it. So the young man and the girl sat by the fire pit affectionately facing each other, or sang love songs duet, or whispered, lingering love words, and broke up reluctantly until the rooster announced the dawn. 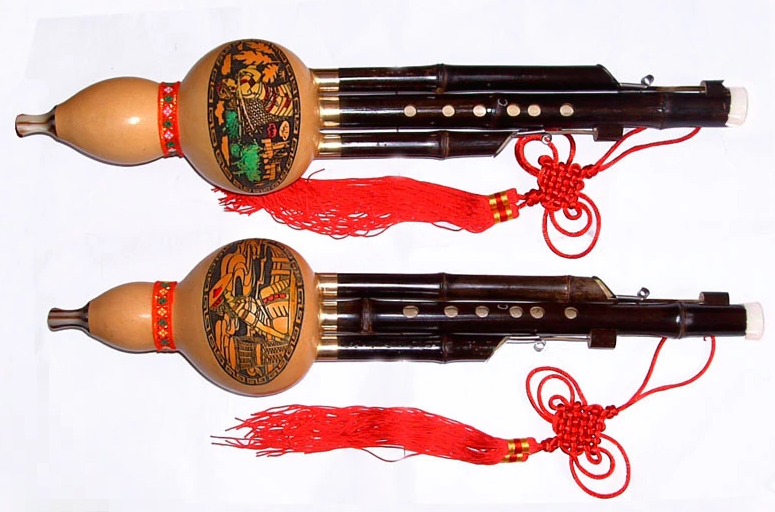 Throughout the ages, I do not know how many young people in Achang have used this magical gourd flute to attract beautiful girls and become friends with Qin and Jin.
Due to the differences between ethnic groups and regions, the gourd flute of other ethnic minorities in Yunnan Province is still different in shape and playing method. However, they all have a common feature, that is, they are often used to play folk songs, especially good at playing music with smooth melody. Generally, there are more long tones in the tune, the chorus is rich, and the music is soft and harmonious, which can better express the player. thoughts and feelings.
After the founding of the People's Republic of China, Chinese folk musicians carried out continuous reforms on the cucurbit silk. In 1958, the Yunnan Song and Dance Troupe first expanded the vocal range to 14 tones. Some literary and art groups in Beijing have made two new types of cucurbit silk. Among them, the six-hole cucurbit flute can play single tone, double tone, single melody plus continuous tone and two harmonic melody plus continuous tone. It not only maintains the unique timbre and style of the original instrument, but also increases the volume, expands the sound range, and enriches the sound color and expressiveness. The gourd flute, a folk musical instrument of Chinese ethnic minorities, was put on the stage, and it also appeared on the world art stage with the visits of Chinese musicians.

Hulusi training in Xiayan Village, Chengxi Street, Yiwu has been carried out smoothly
Organized by 晚荣 on 2022-12-16
On December 11th, the hulusi training activity sponsored by the Publicity Department of Yiwu Municipal Committee and co-organized by Chengxi Street Cultural Hall was held in the Xiayan Village Cultural Hall of Chengxi Street.
read >>
National culture inheritor Ni Kaihong: With cucurbit flute blowing youth striving song
Organized by 汾酒 on 2022-12-08
Ni Kaihong, member of the Third Youth Federation of Dehong Prefecture, examiner of Social Art Level Examination of Yunnan Arts University, President of Hulusi Association of Lianghe County.
read >>
Jiangsu Taixing 18 years old coming-of-age ceremony demonstration activities come to a successful end
Organized by 象牙山首富 on 2022-12-07
Recently, Taizhou City and Taixing City 18 years old rite of passage demonstration activities were held in Taixing Gymnasium. The students of Jiangsu Taixing Secondary Professional School who have reached the age of 18 step through the adult door together and step into a new stage of life with firm steps.
read >>
The Second Experimental Primary School in Yantai High-tech Zone deduces the charm of the club
Organized by 琪琪 on 2022-11-30
November 23rd was the club activity day of the Second Experimental Primary School of High-tech Zone. The media reporters went to the campus and went to a club "feast" with the teachers and students of the whole school.
read >>
Xingyun Hulusi Community of Yantai High tech Zone No. 2 Experimental Primary School
Organized by 九曲 on 2022-11-25
Members of the Xingyun Hulusi Orchestra are performing the song "Green Mountain" in the Xingjian Museum of the Second Experimental Primary School in Yantai Hi tech Zone.
read >>