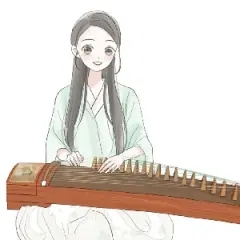 Cui Jianghui is an up-master of the music area of station B, and currently has 119,000 fans. His videos mainly focus on guzheng performance, as well as teaching sharing, etc. to share dry guzheng skills.

Wang Li
Wang Li is a Chinese music master, whose representative work is Liuyang River.
read >>
Zang Hongxiao
Zang Hongxiao, born in June 2006, is currently studying at Xinqiao Senior High School in Changzhou City. He is under the tutelage of Mr. Jiang Zhoujian, a member of the Aesthetic Education Working Committee of the Chinese Art Vocational Education Association and the founder of the Jiangsu Zhouyi Aesthetic Education Brand.
read >>
Su Yitong
Su Yitong, a young Chinese guzheng player, founded the Beijing Guoyin Yaleqin Museum in 2012, and in 2013 established the "Zhonghua Zheng" Five-color String Orchestra.
read >>
Yang Yang
Yang Yang (scientific name Hu Xuwan) was born in Huzhou City, Zhejiang Province. At the age of 18, he is currently studying Guzheng in the third grade of the high school attached to the Central Conservatory of Music. Under the tutelage of Professor Yuan Sha, a famous guzheng performer and educator from the Central Conservatory of Music.
read >>
Zhan Qian
Zhan Qian, female, from Nanjing, Jiangsu Province, is a young Chinese guzheng performer. She is currently studying at the School of Music of Nanjing University of the Arts, pursuing a master's degree in Chinese musical instrument performance under the tutelage of her tutor, Professor Yan Aihua, a guzheng educator.
read >>