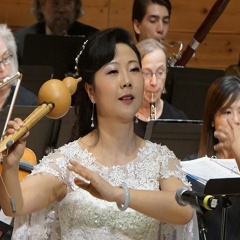 He has won the gold medal in the National Calendula Invitational Competition in Beijing, Hong Kong, Yunnan and other places; he has been engaged in the promotion of cucurbit silk teaching for many years, and his students and teams have won many awards in national competitions; he has been invited to serve as a judge of the national cucurbit silk competition for many times. He has been invited to participate in cultural exchange performances in Beijing, Hong Kong, South Africa, the United States, Vienna and other countries and regions. In March 2019, he was invited to the United States to successfully hold a cucurbit silk symphony concert.

Hulusi training in Xiayan Village, Chengxi Street, Yiwu has been carried out smoothly
Organized by 晚荣 on 2022-12-16
On December 11th, the hulusi training activity sponsored by the Publicity Department of Yiwu Municipal Committee and co-organized by Chengxi Street Cultural Hall was held in the Xiayan Village Cultural Hall of Chengxi Street.
read >>
National culture inheritor Ni Kaihong: With cucurbit flute blowing youth striving song
Organized by 汾酒 on 2022-12-08
Ni Kaihong, member of the Third Youth Federation of Dehong Prefecture, examiner of Social Art Level Examination of Yunnan Arts University, President of Hulusi Association of Lianghe County.
read >>
Jiangsu Taixing 18 years old coming-of-age ceremony demonstration activities come to a successful end
Organized by 象牙山首富 on 2022-12-07
Recently, Taizhou City and Taixing City 18 years old rite of passage demonstration activities were held in Taixing Gymnasium. The students of Jiangsu Taixing Secondary Professional School who have reached the age of 18 step through the adult door together and step into a new stage of life with firm steps.
read >>
The Second Experimental Primary School in Yantai High-tech Zone deduces the charm of the club
Organized by 琪琪 on 2022-11-30
November 23rd was the club activity day of the Second Experimental Primary School of High-tech Zone. The media reporters went to the campus and went to a club "feast" with the teachers and students of the whole school.
read >>
Xingyun Hulusi Community of Yantai High tech Zone No. 2 Experimental Primary School
Organized by 九曲 on 2022-11-25
Members of the Xingyun Hulusi Orchestra are performing the song "Green Mountain" in the Xingjian Museum of the Second Experimental Primary School in Yantai Hi tech Zone.
read >>