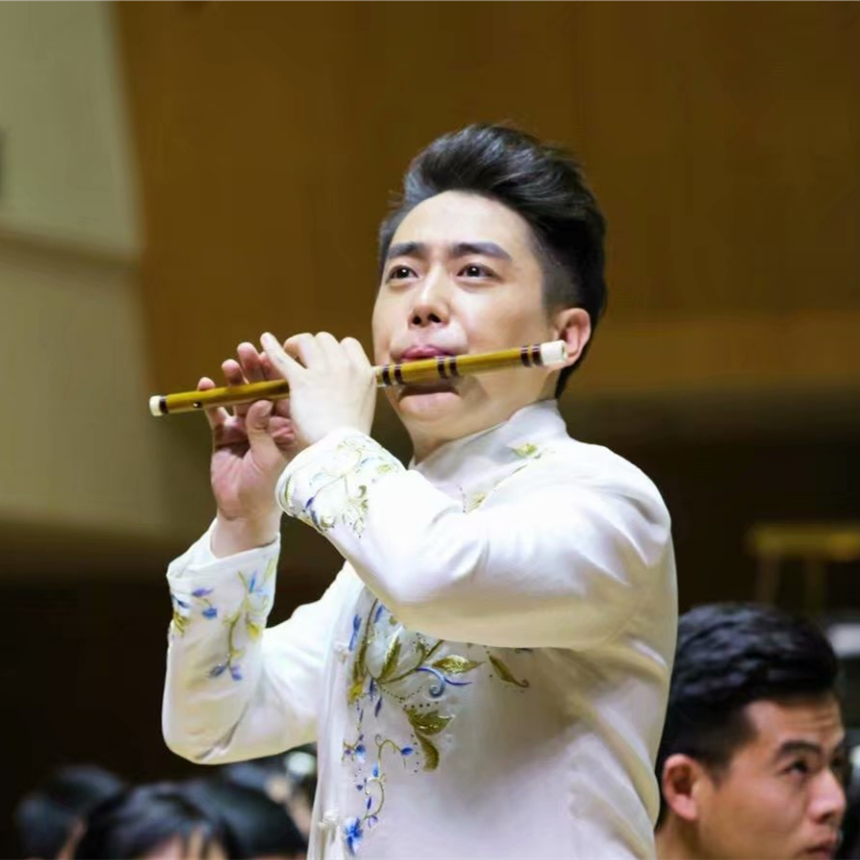 Ding Xiaokui is a young wind musician of the Central Chinese Orchestra.

In 2000, he was admitted to the Music Department of the People's Liberation Army Academy of Arts with the best grades in his major. He studied bamboo flute with his uncle Liang Shuzhuang since he was a child, and successively studied with Yan Ming from Weifang Song and Dance Troupe, Professor Hao Yijun from Shandong University of the Arts, Professor Dai Ya from the Central Conservatory of Music, Professor Zeng Duke from the PLA Academy of Arts, and Mr. Wang Ciheng, a flute master from the Central Chinese Orchestra.

Winner of the silver medal in the Dizi professional group of the first CCTV National Instrumental Music TV Competition. In 2011, he won the silver prize in the Shanghai Spring International Jiangnan Silk and Bamboo Invitational Competition. In 2013, he won the Gold Award of the Ministry of Culture's National and Folk Excellent Combination. He has visited many countries around the world with the Central Chinese Orchestra. He played important roles in large-scale plays such as "Impression of Chinese Music" and "Seeing Chinese Music Again" directed by Wang Chaoge and "Looking for Du Fu" directed by Yi Liming, and received wide acclaim. On April 1, 2017, a solo recital was successfully held at the Beijing Concert Hall. In July of the same year, he played the young Xuanzang in the first national instrumental musical "Xuanzang Westward Journey" by the Central Chinese Orchestra.

Participated in the recording of the original soundtrack music of many film and television dramas (The Great Military Advisor Sima Yi's Military Advisor Alliance, Tiger Roaring and Dragon Roaring), (Swinging), (Youth), (The Flower Blooms and the Moon Is Round), (Ruyi's Royal Love in the Palace), (Datang Xuanzang) ), (Notes on Tomb Robbers), (The Three Kingdoms Seeing the Dragon Disarming), (Jin Yiwei), (No Man's Land), (New Water Margin), (New Romance of the Three Kingdoms), (New Xiao Shiyi Lang), etc. Recorded song albums for many famous singers and participated in the recording of many famous variety shows such as (I Am a Singer) and (Fenghua Chinese Music). Committed to the cross-border performance of multi-cultural music, he cooperated with Zhongruan master Feng Mantian and jazz pianist Kong Hongwei with the Golden Buddha Jazz Orchestra.

xiao
Xiao (pinyin: xiāo), divided into dongxiao and qinxiao. And because the flute has a hole, it is different from the pan flute without a hole, so it is called "dongxiao". The xiao has a long history, the sound is round and soft, quiet and elegant, suitable for solo and ensemble. It is generally made of bamboo with blow holes at the top.
hulusi
Hulusi (pinyin: hú lu sī), also known as "calabash flute", is a musical instrument of ethnic minorities in Yunnan. Hulusi originated in Lianghe County, Dehong Dai and Jingpo Autonomous Prefecture, and is mainly popular in Dai, Achang, Wa, De'ang and Brown. The Dehong and Lincang areas in Yunnan where ethnic groups live together are rich in local colors.
Bawu
Bawu (pinyin: bā wū), alias Bawu, Gebi, Bai, Bilu, Ule, is a bamboo-winded and copper-reed musical instrument, popular among the Yi, Miao, Hani and other ethnic groups in Yunnan.
Xun
Xun (pinyin: xūn) is a closed-mouthed wind instrument unique to the Han nationality. It occupies an important position in the history of primitive art in the world.
Paixiao
Pai Xiao (pinyin: pái xiāo), also known as Pan Di, Fengwei Xiao, is an ancient musical instrument found in ancient China, South America, Europe, and Africa. Connect several wooden or bamboo pipes of different lengths, blow directly through the mouth, each pipe emits a sound, and the melody is displayed by continuously blowing different pipes.

The gorgeous night sky on the Spring Festival is who lit the fireworks for whom
赵锦辛 - 10 views
"I want to see you" needs to be said three times, which is the melody I miss in my heart
弥光 - 13 views
Folk music version of Beijing opera ballad "Wujiapo 2021"
尼禄 - 60 views
Merry Christmas, Mr. Lawrence folk music performance
孤勇者 - 23 views
Of course, Jay's Maple is the best match for late autumn
小埋 - 20 views

A blind boy playing bamboo flute live allows him to see light in the darkness
Organized by 赵锦辛 on 2022-12-21
"Although very tired, but dripping dripping", Tan Weihai still felt more than enough after playing bamboo flute for netizens for 3 hours in @Tan Weihai Dixiao studio. As a patient with congenital visual nerve atrophy, Tan Weihai's world is dark, but he lets more people see him by playing bamboo flute.
read >>
Chinese music school National Orchestra special concert in the "Autumn of Chengdu" played
Organized by 长乐 on 2022-12-19
On the evening of December 14, the 28th "Autumn of Chengdu" Chengdu International Music Season -- the special concert of Chinese Music School Chinese Orchestra arrived as scheduled.
read >>
The shepherd boy played the flute on the back of the cow
Organized by Eno Elvis on 2022-10-24
牧童在牛背上横笛而吹。这是音乐家贺绿汀童年生活的一个剪影。虽然饱经磨难的童年让他难得有那份闲适的心境。
read >>
Instrumental Music Enters Yangluo No. 5 Primary School and Insists on Implementing Instrumental Music Characteristic Courses
Organized by 琪琪 on 2022-10-24
The ethereal and beautiful pottery flute, the bright and crisp bamboo flute, and the euphemistic and beautiful cucurbit flute make you enter the Fifth Primary School in Yangluo Street, Xinzhou District, Wuhan City, and you can sometimes be attracted by these beautiful sounds of national music.
read >>
The "Songting Cup" National Flute Invitational Competition officially started
Organized by 小何 on 2022-10-09
On the morning of October 7, the fourth "Songting Cup" National Flute Invitational Competition was hosted by Zhejiang Ethnic Orchestra Society and organized by Zhao Songting Flute Art Research Association.
read >>