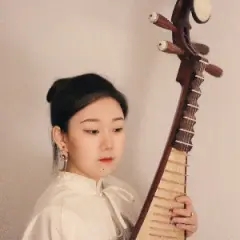 Miss Qian Mi is an up-master in the music area of station B. She currently has 22,000 followers. Her videos mainly focus on pipa performances.

Miss Qianmi is a girl studying in France, currently studying a bachelor degree in film major. As a folk music lover, she has played the lute for 17 years. Miss Qianmi's signature is: I hope the culture I love can bloom further afield. .

The content of Miss Qianmi's video is mainly to perform Pipa playing on the street. Her repertoire is rich, and all kinds of well-known music, classic ancient songs, and episodes of film and television dramas can be found in Miss Qianmi's video. The main representative works are [German-French Border | Pipa] House of Flying Daggers, feel the battlefield, the blood book of ten thousand people is coming! , [[German-French Border | River Rhine] Pipa Myth My Xiaochuan is back, etc.

Zhao Congyuan's cosmic concept music work "Sanxingdui · Divine Bird", QQ Music digital album limited release
Organized by 离去之原 on 2022-09-21
In the era of the fusion of virtual and reality, "Sanxingdui·Shenniao" will present the ancient charm of Chinese music art to the music fans for the first time in the form of "numerical and real fusion".
read >>
"Face to face with masters" Fang Jinlong's special event on Chinese studies entered Changsha
Organized by 拙 on 2022-09-19
On the afternoon of September 18, the special event of Fang Jinlong's Chinese Studies of "Face to Face with Masters" was held in Changsha Concert Hall. Fang Jinlong, an artist of Chinese music, a collector of musical instruments, and a representative of the contemporary five-stringed pipa, brought a splendid Chinese music cultural feast to the citizens of Changsha.
read >>
Learn Pipa for free at your doorstep! Nearly 200 Pudong Pipa students have been trained here
Organized by 不知桃夏 on 2022-09-14
The right hand plays the pick, the left hand presses the sound, the string is clanging, the pearl falls on the jade plate... Recently, there have been bursts of pipa playing in the Pudong School Pipa Training Center in Huinan Town.
read >>
Liaoyuan Pipa Culture and Art Week: Liaoshui nurturing arpeggiated charms of new Liaoyuan
Organized by 天井 on 2022-09-06
Recently, the Propaganda Department of the Jilin Provincial Committee of the Communist Party of China, the Jilin Provincial Department of Culture and Tourism, the Liaoyuan Municipal Committee of the Communist Party of The 4th "Liaoyuan Pipa Culture and Art Week" and the 4th "Liaoyuan Cup" Pipa Art Elite Exhibition came to an end in the concert hall of Xianshun Pipa School in Liaoyuan City, Jilin Province.
read >>
The most beautiful time Zhao Cong, head of the China Central Chinese Orchestra, performed the ancient city
Organized by chen on 2022-08-30
On the evening of the 27th, "the most beautiful time" - Zhao Cong and her friends' Pipa concert was staged at the Quanzhou Grand Theater. This is an audio-visual feast combining Chinese and Western cultures. Zhao Cong, the head of the group, led the performance. The superb performance made the pipa and piano and other Western string instruments perfectly blend.
read >>