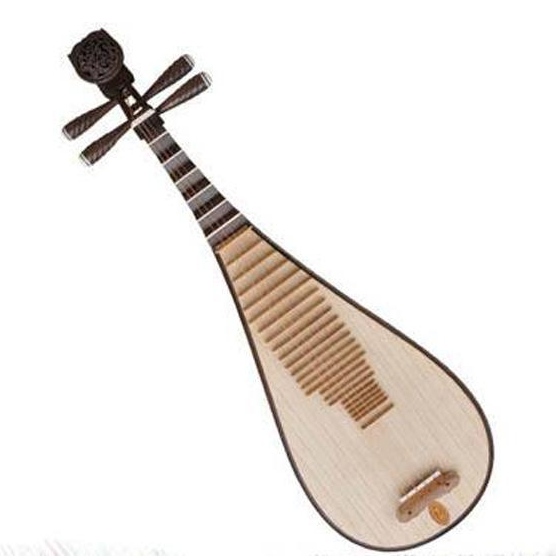 Pipa (pinyin: pí pa), the first plucked instrument, is a traditional plucked instrument in East Asia, a plucked stringed musical instrument. Made of wood or bamboo, the speaker is half-pear-shaped and has four strings on the top. It was originally made of silk thread, but now it is mostly made of steel wire, steel rope and nylon. The neck and faceplate are provided with "phase" and "fresh" to determine the phoneme. It is an important national musical instrument that can be played solo, accompaniment, ensemble and ensemble.
It has a history of more than two thousand years. The earliest musical instrument known as "Pipa" appeared around the Qin Dynasty in China. The "jue" in the word "Pipa" means "two jades collide, making a pleasant slamming sound", indicating that this is a musical instrument that makes sounds by hitting the strings. The names "Pi" and "Pa" are derived from the right-hand technique of playing these instruments. That is to say, Pi and Pa were originally the names of two playing techniques. Pi is played forward with the right hand, while Pa is played backward with the right hand. Before the Tang Dynasty, pipa was also the general term for all lute (also known as Lute) plucked instruments in Chinese. The Chinese lute spread to other parts of East Asia and developed into the current Japanese lute, Korean lute and Vietnamese lute.
In the history of modern Chinese Han nationality music, there are many schools such as "Shanghai School" (Pudong School) Pipa, "Zhe School" (Pinghu School) Pipa, "Wang School" (Wang School) and so on.
The pipa evolved from the straight pipa and the Quxiang pipa in history. According to historical records, the straight pipa appeared earlier in China. The "Qin Hanzi" in the Qin and Han dynasties was the straight piece of the round resonance box with the straight handle. Pipa (sound box with skin on both sides), which was developed from the Xiantuo of the late Qin Dynasty. "Ruan Xian" or "Ruan" is a straight-handled wooden circular sound box with four strings and twelve columns, holding a pipa played by hand vertically. Ruan Xian was good at playing this instrument in the Jin Dynasty, so it was named after it, that is, today's Ruan.