Li Ping was a disciple of Liyuan, and he was famous for his skill at playing Konghou. "Once the emperor sees each other once a day, the princes and generals will greet him immediately", and his worth seems to be far higher than that of the famous singer Li Guinian in the prosperous Tang Dynasty. His superb skills were enthusiastically appreciated by poets. Li He's work is rich in imagination, magnificent in color and strong in artistic appeal. Fang Funan of the Qing Dynasty compared it with Bai Juyi's "Pipa Xing" and Han Yu's "Listening to Master Ying Playing the Qin", and suggested it as "copying the sound to the text". 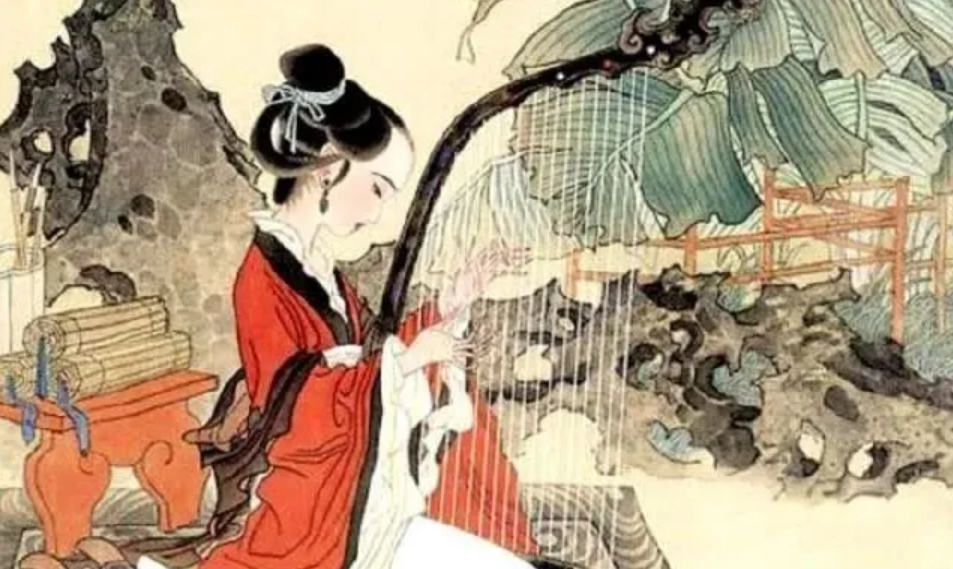 This poem uses a series of unexpected metaphors to vividly reproduce the poetic and rich musical realm created by the musician Li Ping, vividly records Li Ping's superb skills in playing Konghou, and also shows that the author has a deep understanding of the music and has Rich artistic imagination. The language of the whole poem is splendid, the conception is novel, and the idea is new. For the music itself, only two sentences are used to describe the music, and a lot of brush and ink are used to render the music's shocking, weeping ghosts and spirits. A large number of associations, imaginations and legends make The work is full of romanticism.

The beginning of the poem is straight to the point. "Wu Si Shutong" wrote a well-structured konghou to set off the superb skills of the performer. Writing things means writing people, and it has the effect of killing two birds with one stone. The term "high autumn" not only indicates that the time is late autumn in September, but also contains the meaning of "high autumn and fresh air", which is more rich than "late autumn" and "twilight autumn". Two or three sentences to write music. The poet deliberately avoids the invisible, colorless, and elusive subject (the sound of Konghou), and writes from the object (“empty mountain condensing clouds”, etc.), and uses reality to describe the imaginary, which is also true and illusory, and is extremely expressive.

As soon as the beautiful and melodious string singing came out, the floating clouds on the empty mountains froze and froze, as if they were listening with their heads down. The sentence "empty mountain" empathizes with things, and the cloud is written as having human auditory functions and thoughts and feelings. It cooperates with and complements each other with the following "Jiang'e" sentence, and tries to highlight the magic and beauty of the sound of Konghou, with the charm of "shattering the world, crying ghosts and gods".

In the fourth sentence, "Li Ping China plays the Konghou", the performer's name and surname are pointed out with the "Fu" pen, and the location of the performance is explained. In the first four sentences, the poet deliberately broke through the usual way of describing the characters, time and place in order, and made careful arrangements, first writing the qin, then the voice, and then the person, interspersed with the time and place. In this way, the sound of music is highlighted, and it has the artistic power of pre-emptive.

The five and six sentences are written with music on the front, and each has its own characteristics. The sentence "Kunshan" is written in voice, focusing on the ups and downs of music; the sentence "Furong" is written in form, deliberately rendering the beauty of music. "Kunshan Jade Broken Phoenix Cries", that Konghou, sometimes many strings chirping in unison, noisy, like a jade broken landslide, which is indistinguishable; sometimes a single string sounds like a phoenix chirping, the sound shakes the trees, and the sound stops the clouds.

"The hibiscus weeps and the pandan laughs", the idea is peculiar. Dewy hibiscus (i.e. lotus) is not uncommon, and blooming orchids do give people the impression of smiling. They are the embodiment of beauty. The poet used "Hibiscus Weeping Dew" to describe the sadness and depression of the qin sound, and "Xianlan Xiao" to show the joy of the qin sound, which can not only be heard, but also witnessed. This way of expressing is really wonderful.

From the seventh sentence to the end, the sound effects are all written. First, I wrote that the cold air and cold light in front of the twelve city gates of Chang'an were all melted by the sound of Konghou. In fact, the cold air cannot be melted away, because Li Pingkonghou plays very well, and people are so intoxicated by his wonderful string singing that they can't even feel the wind, cold and dew in the late autumn season. Although the language is romantic and exaggerated, it expresses a genuine feeling. "Purple Emperor" is a pun, referring to both the Emperor of Heaven and the emperor at that time. The poet uses "Purple Emperor" instead of "King", which is not only a novelty in the choice of words and sentences, but also an ingenious transitional technique that links the previous and the next, and naturally expands the artistic conception of poetry from the world to the fairy house.

In the following six sentences, the poet uses the wings of imagination to fly to heaven and to the mountain, bringing readers into a more vast, profound, magical and magnificent realm. "Nu Wa refines the stone to fill the sky, and the stone breaks the sky to amuse the autumn rain." How daring, unexpected, and touching. The word "funny" closely links the powerful charm of music with the above-mentioned spectacle. Moreover, the scene of the earth-shattering and the autumn rain can also be regarded as the manifestation of the image of music.

In the fifth couplet, the poet described from the heaven to the mountain. The wonderful music was introduced into the mountain, and the goddess were also moved by it; the music was so emotional that it caused the "old fish to dance the waves and thin dragons". The poet uses the words "old" and "thin" to decorate the ichthyosaurs, but they have completely opposite artistic effects, making the music image more plump. The old fish and the skinny Jiao were originally weak and weak and difficult to move, but they jumped and danced to the melody of the music. This unexpected image description makes the invisible and wonderful sound of konghou appear in relief in front of the reader's eyes.

The above eight sentences are written in form, most of which are moving objects. The last two sentences are changed to still lifes for further contrast: Wu Gang, who has been cutting osmanthus all day and is exhausted, leans on the osmanthus tree and stands there for a long time, forgetting to sleep; the jade rabbit crouches aside, letting the late night dew keep spilling on it. He soaked his sweater and refused to leave. These beautiful images full of thoughts and feelings are deeply imprinted in the readers' hearts, just like the bright moon projected on the water, which is deep and distant, inspiring and thought-provoking.

The greatest feature of poetry is its peculiar imagination, vivid images, and full of romanticism. The poet is committed to transforming his abstract feelings, feelings and thoughts about the sound of konghou into concrete images through association, making them visible and sensible. The poems do not directly judge Li Ping's skills, nor do they directly describe the poet's self-feelings, but only imitate the sound of music and its effects. However, throughout the whole piece, the poet's sentiments are everywhere, and he expresses his feelings and evaluations of the music tortuously and clearly. This makes the external images and the internal emotions merge into one, forming an artistic realm that can be pleasing to the eyes and the eyes.

Konghou's immortal music attracts all the immortals to the "Zhen" city
Organized by 橘子猫 on 2022-06-20
The legend of Konghou City not only has its beautiful legends, but also has historical sites full of mystery. Moreover, Konghou musical instruments are still widely used on the big stage of music.
read >>
The Decline and Rise of Konghou
Organized by 尘夕 on 2022-06-20
Konghou has a history of more than 3,000 years in our country. China's "Old Tang Book·Music Records" contains: "Konghou, made by Emperor Wu of the Han Dynasty, was made by the music person Hou Tiao, and it is called the Taiyi Temple... Its sound is splendid, and it is called Kanghou, the sound is falsely called Konghou".
read >>
Lu Lu: Adhering to the work of intangible cultural heritage is the persistence of every intangible inheritor of traditional culture
Organized by 亦寒 on 2022-06-20
Intangible cultural heritage work is first and foremost a perseverance. It is the persistence of the entire Chinese nation to traditional culture, and it is also the persistence of every intangible heritage inheritor to the intangible cultural heritage projects he is engaged in.
read >>
Chen Yiling: All musical styles and musical languages can be boldly tried
Organized by 咖喱麦兜 on 2022-06-20
"It is very rare for Konghou to have a new work. The premiere of Konghou's work in a concert that is all folk music concertos can make the audience clearly feel the difference between this instrument and other folk instruments."
read >>
Xinjiang Qiemo's "Konghou Dolls Group" grows
Organized by 雨童 on 2022-06-02
Liang Pu, a Konghou teacher in Qiemo County, a small desert town in Xinjiang, did not expect that the children of the "Konghou Dolls Group" would be so obsessed with this ancient musical instrument.
read >>