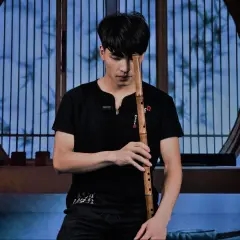 Yunyi Dixiao-He Jian is an up master in the music area of station B. He currently has 91,000 fans. His videos are mainly based on flute and flute performances. The video content is rich in well-known music, various popular music adaptations, two-dimensional music, etc. Everything you need. The main representative works are "Myth" flute, flute and melody, all the vicissitudes of life are sad, and the listeners cry, and the flute version of "Doesn't Matter Man" that is popular all over the Internet must be the first time you listen to it, etc.

Han Lei
Han Lei graduated from the Shanghai Conservatory of Music and studied under Zhang Guohua, Zhang Yongfa, Zhan Yongming and Dai Ya. He is currently the deputy head of the Heilongjiang Provincial Song and Dance Theatre Chinese Orchestra and the chief bamboo flute of the orchestra.
read >>
Zhang Renqing
Zhang Renqing, male, born in 1982, a party member, a native of Hengshui, Hebei, a young educator and performer of flute, xiao and guqin.
read >>
Bian Ge
Bian Ge is a young Chinese flute player, flute and flute teacher, and music creator. He is good at flute, xiao, xun, ocarina, cucurbit flute, bawu and other wind instruments.
read >>
Zhang Yingying
Zhang Yingying, a young flute and flute player, is the first female performer in China to win the gold medal in the Dizi professional group of the government's highest award "Wenhua Award", and a silver medal in the CCTV National Instrumental Music Competition.
read >>
Li Le
Li Le, a young Chinese bamboo flute player, a bamboo flute teacher at the Tianjin Conservatory of Music, the first place in the cctv folk group instrumental music competition for bamboo flute, and the winner of the Golden Bell Award for bamboo flute.
read >>

xiao
Xiao (pinyin: xiāo), divided into dongxiao and qinxiao. And because the flute has a hole, it is different from the pan flute without a hole, so it is called "dongxiao". The xiao has a long history, the sound is round and soft, quiet and elegant, suitable for solo and ensemble. It is generally made of bamboo with blow holes at the top.
Dizi
Dizi (pinyin: dí zi), also known as the horizontal flute, is generally used as an important musical instrument to accompany opera.

"Flute Rhythm Flying Sound - Han Lei Bamboo Flute Solo Concert
Organized by 辞惘 on 2022-09-22
In order to celebrate the victory of the 20th National Congress of the Communist Party of China, on September 19, "Flute Rhythm - Han Lei Bamboo Flute Solo Concert" was staged in the Harbin Old Hall Concert Hall.
read >>
What is the difference between the flat blowing and the urgent blowing of the flute?
Organized by 赵锦辛 on 2022-09-12
The flute has flat blowing and urgent blowing, which are the playing skills of the flute. The flat blowing should be slow, and the urgent blowing should be fast. These two techniques often appear in the expression of the flute music.
read >>
What is the difference between the flute song "Hundred Birds" and the suona song "Hundred Birds Chaofeng"?
Organized by vespa on 2022-09-07
The flute song "Hundred Birds Introduction", as the name suggests, is to imitate various bird calls in nature with a flute, to attract the attention of the birds in nature, so as to integrate with nature, so that bird calls and flute sounds are combined into one, to reflect The unique charm of flute music.
read >>
"Cultural empowerment" reshapes the rural style and creates a model for future rural construction
Organized by 夏浩东 on 2022-09-05
Zhongtai Street is known as the "Hometown of Bamboo Flutes in China". There are more than 160 bamboo flute production and processing enterprises and more than 60 Taobao stores in Zijing Village under its jurisdiction, with an annual output value of 340 million yuan and a market share of 85% domestic and foreign bamboo flutes. %above.
read >>
"Flute Rhythm", "East to West", an appointment on the cloud that spans time and space
Organized by 默妍 on 2022-08-16
Recently, China Telecom, together with the Central Opera House, China Philharmonic Orchestra, Shanghai Conservatory of Music and other 10 first-class performance institutions in China, jointly created the Tianyi Cloud Performing Arts "Summer on the Cloud" performance season grand opening.
read >>