Sound has no physical image, and it is fleeting and difficult to capture. How to describe it so that it can be vivid and perceptible? Bai Juyi's "Pipa Xing" in the Tang Dynasty and "Minghu Ju Tingshu" in Liu E's "Old Can's Travels" in the Qing Dynasty, although the former is a poem, the latter is a novel, the former depicts the sound of the pipa, and the latter depicts storytelling. sound, but the two have similarities and similarities in the description of sound. 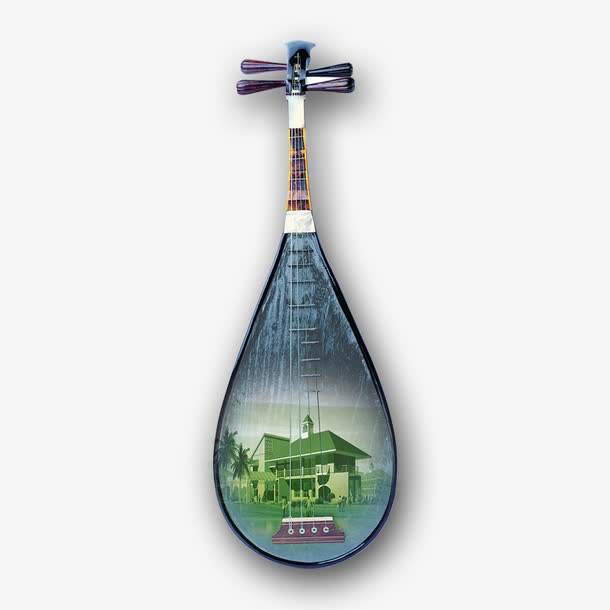 The description of the sound can be divided into two parts: the frontal description and the side profile. From these two aspects, the storytelling skills of the Pipa Girl and Wang Xiaoyu are written. Let's look at the front view first:

During the audition to set the tone, the pipa girl "low eyebrows and hands" seemed to carelessly "pick the shaft three or two times", and then "there is love before the tune is completed"; It's like the Twelve Laws." The two of them are superbly skilled, and they both seem to be able to pick it up easily.

In "Pipa Xing", the pipa girl's playing starts from "pickling the strings on the rotating shaft", then "noisily, cut and miscellaneous playing", and then "intermediate Guan Yingyu" and "deep throat spring flow", and then "the sound gradually ceases", and in the silent After Chu Ningjue, a sound like "the silver bottle broke into the slurry and the iron cavalry protruded from the knife and gun shot" rose, and finally ended with a high tone like "cracked silk".

The voices depicted by the two start from a general scale, then gradually decrease, and then become silent, and then suddenly advance, and end at a fierce and high place. Together, the ups and downs. It not only shows the superb skills of the rapper, but also shows the attraction, that is, the twists and turns of the sound, which are ever-changing. The difference is that the process described in "Minghu Ju Tingshu" is more specific and complex.

3. Both adopt the method of metaphor of sound by shape, transforming invisible sound into tangible image, and transforming intangible hearing into visible and perceptible things

When copying music in "Pipa Xing", it also uses various vivid metaphors to enhance its imagery, such as "the big string is noisy like a rushing rain", it uses the double-syllable word "noisy" to copy the sound, and it uses "such as rushing". Rain" makes it visual, both auditory and visual. Comparing it with "big beads and small beads falling on a jade plate", it is dazzling and dizzying. When showing the "slippery" and "astringent" in the music melody, the author uses two metaphors: "Yingyu in Jianguan is slippery at the bottom of the flower, and it is difficult to flow under the ice in the secluded throat." The voice, sad and choked. After a short pause, the voice suddenly rose again, "the silver bottle is broken" and "the iron cavalry stands out", vividly writing the high-pitched and crisp voice.

For example, "Sing a few lines of the book, the sound is not very loud, but I can feel the wonderful realm that I can't tell: in the internal organs, like comforting and fighting trade, no place does not fit, 36,000 pores, like eating ginseng fruit, Not a single pore is unhappy" uses feeling, focusing on the comfort of hearing; when it is said that when the sound reaches a high place, it is like "a wire is thrown into the sky". Crisp, tenacious, and high-pitched; the sound of writing turns round and round, but it rises steadily, and the author uses the sights that can be seen and the things that have been experienced as metaphors: "It is like the scene of climbing Mount Tai from the west of Aolai Peak: the beginning of Seeing that the cliffs of Aolai Peak are still dry, I think that the sky is connected to the sky; when I turn to the top of Aolai Peak, I see that Fanziya is even more on Aolai Peak; and when I turn to Fanziya, I see Nantianmen is even more on Fanziya.” It highlights the characteristics of the voice being sung higher and higher, yet vigorous, high-pitched, melodious and melodious. After the sound stopped for a while, "suddenly it rose again, like setting off oriental fireworks. A marble went up to the sky, and then turned into thousands of five-color firelights, scattered vertically and horizontally." Imagining sounds such as "flowers sing in the spring" and "hundreds of birds sing" also makes people feel dazzled and overwhelmed.

Such vivid and vivid reproduction of the ever-changing musical images has made us cannot help but admire the author's artistic talent, and the author has used a side-to-side contrast technique in addition to the frontal imagery.

First of all, both protagonists are highly skilled people, so the author first writes (abbreviated, of course) before writing the voice. The appearance of the two people only appeared after a lot of calls, and the appearances are also similar: "Pipa Girl" is "still holding the pipa and half covering her face", Wang Xiaoyu is "half down her head", the two want to reveal The posture of still hiding is more eye-catching, making people more eager to know how his skills are.

Secondly, before the appearance, there is a contrast to the sound. The former, "suddenly heard the sound of the pipa on the water, the owner forgets to return home and the guest does not send it out", suggesting that the sound of the pipa that can make the poet forget to return must be good; Wang Xiaoyu's storytelling skills are wonderful, such as the storytelling "no one can match".

Once again, after the performance and rap, there is another contrast. In "Pipa Xing", it is said that "the east boat is silent in the west, only the heart of the river is white with the autumn moon", the surroundings are quiet, and everyone is immersed in the soul-stirring and thrilling music. . "Minghu Ju Tingshu" said, "The sound of applause from the audience was thunderous", and people were amazed at the rap and the table. .